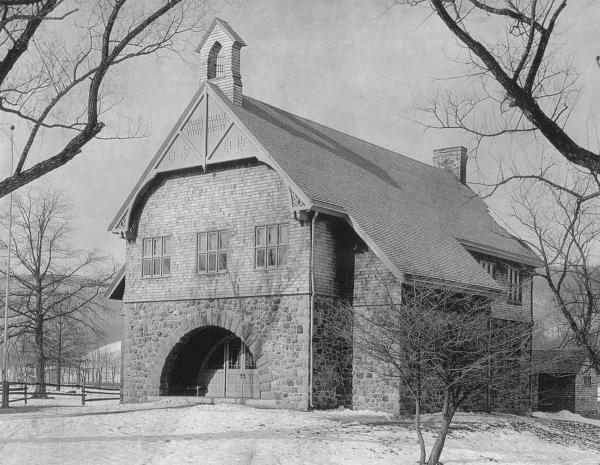 The stately stone structure that dominates the intersection of Route 202 and Darlington Avenue in Mahwah, NJ is the focus of an exciting restoration effort. After more than a half century of intermittent use and abandonment, the Darlington Schoolhouse is about to begin a promising new chapter in its history!

The New York-New Jersey Trail Conference, in partnership with the Township of Mahwah, the County of Bergen and the State of New Jersey, has acquired the building. To make the building a location for the Trail Conference's new headquarters, it will be restored so that it can serve as a public resource for trail and environmental education.

In 1872, Alfred B. Darling, owner of the Fifth Avenue Hotel in New York City, established Valley Farm in the Ramapo Valley in Mahwah, employing scores of workers. The area around Darling's farm estate became known as the hamlet of Darlington.

Havemeyer, with assistance from Darling, financed the building of a new schoolhouse in the hamlet and hired Dudley Newton, architect of Havemeyer's Newport, R.I. residence, to design and oversee construction.

A stone plaque on the north­west interior wall, just above the entry to the schoolroom, reads: Erected 1891 / By T.A. Havemeyer, Esq. / Dudley Newton, Architect / Sam'l May & Bro., Masons / M.M. Henion, Carpenter. (The May family of masons was from the neighboring hamlet of Ramsey's Station. Martin Henion, the carpenter, lived in the Campgaw area of Mahwah.)

The Darlington Schoolhouse, also known as Havemeyer Hall, was regarded as one of the finest schoolhouses in New Jersey. On the first floor, was one large room for grades one through eight, taught by one or two teachers. The second floor served as a social and community "hall," and as a chapel used by Darlington members of the 1798 Ramapo Reformed Church on Island Road.

The Darlington Schoolhouse is an important repository of Mahwah history and a fine example of Gilded Age architecture. It is remarkably intact and is one of Mahwah's most treasured landmarks.