On July 31, the Trail Conference teamed up with Kim Levinsky, the philanthropic founder of Sassquad Trail Running, as well as Harriman State Park and the Town of Tuxedo, to host a sold-out, first annual Harriman Big Bear SquaTCh half marathon and 7-mile trail run. Thanks to generous donations from Kim, members of the trail-running community, and the waiving of fees by our partners, the event netted $2,000 for the Trail Conference in its first year.

Departing from the village of Tuxedo, runners ascended the western escarpment of Harriman and toured park highlights including Claudius Smith Den, Almost Perpendicular, Lakes Sebago, and Skenonto, and Parker Cabin and Black Ash Mountains. According to Don Weise, Director of Donor Advising, the routes were designed to highlight the quiet side of Harriman and raise awareness for the Trail Conference’s project to rebuild Harriman’s first trail, the century-old Ramapo-Dunderberg Trail. 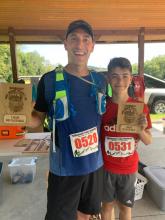 In recent years, Sassquad Trail Running has played an extraordinary role in attracting young, enthusiastic new volunteers and supporters to the Trail Conference. Special thanks are also extended to Ken English and the Tuxedo Town Board, Matt Shook and the Palisades Interstate Park Commission, and Harriman State Park for all their help and support.