From Morris County to the Catskills, TCCC Crews Are Making a Difference

From Morris County to the Catskills, TCCC Crews Are Making a Difference 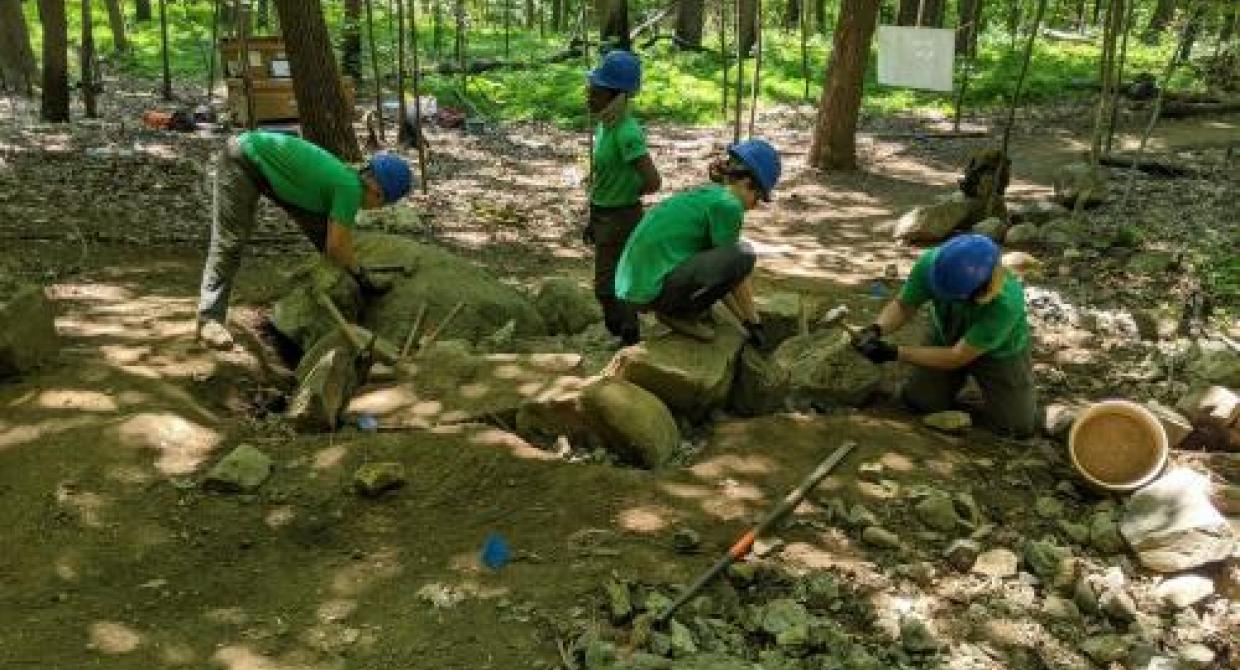 The Trail Conference Conservation Corps (TCCC) creates leaders in environmental conservation while empowering people to play a deeper role in the care of their local parks and trails. By training these AmeriCorps service members to teach the public, we amplify our impact in fostering a commitment to protecting nature.

This season, eight crews are working to improve the trail experience throughout our region. They’ve been documenting their progress in monthly blog posts and on Instagram (@tcconservationcorps); we’re sharing highlights below. 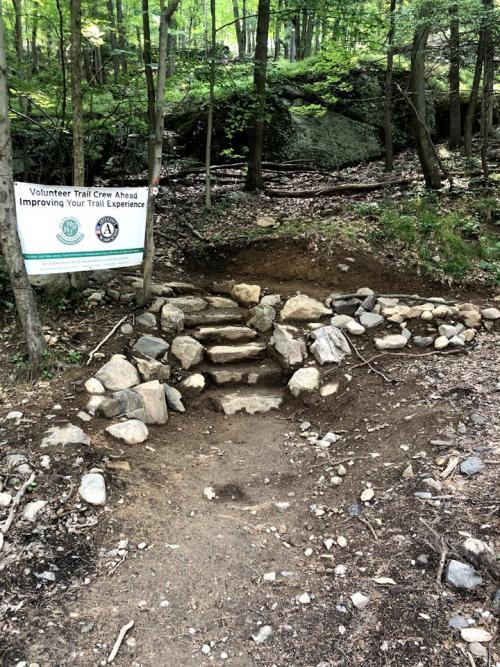 Throughout June, the Harriman Trail Crew completed the set of stairs at the entrance of the Ramapo-Dunderberg Trail. This set of stairs was especially difficult because we were starting on the edge of a service road that we couldn’t block access to. The top of the staircase ended at a section of bedrock, so we had to squeeze eight steps with 9 inches of rise each into about 100 inches of run. To accomplish the squeeze, our last step was pieced together with two rocks that we had to shape to fit the bedrock. After completing the staircase, we focused our efforts on re-naturalizing the area.

The month of July has been a busy one for the Taconic Crew. We have had multiple successful volunteer workdays and workshops on drainages and stone structures at the Wilkinson Trail worksite. The volunteers that have shown up have been highly motivated and interested in what we do as trail crew members. We got them involved in rock moving and staircase building, having very successful results in moving very large rocks for us to use as gargoyles in our staircase! With their help, we have plentiful amounts of rock to use as gargoyles and junk rock for closure that has helped us to finish our staircase. In total, we installed three new steps and repaired four stairs along the Wilkinson Trail. We also ended up closing part of a social path that was confusing many hikers along the Wilkinson Trail, closing 212 feet of social path.

You can read more about the Harriman and Taconic trail crews, as well as the work of the Palisades and Morris County crews, here.

At Breakneck Ridge, the new Nimham Trail opened at the beginning of July, which has provided us another route to suggest to less experienced hikers or those who have done Breakneck many times and want to try something new! It is named after Daniel Nimham, a sachem of the Wappinger Indians, whose ancestral lands include the Hudson Highlands. Surprisingly, none of the brand new signage mentions this! It is a beautiful and user-friendly 0.7-mile connection from the Breakneck scramble to the Wilkinson Trail. The number of users is increasing as we are able to spread the word every day. Over the course of the month, we counted 410 hikers using the new trail! 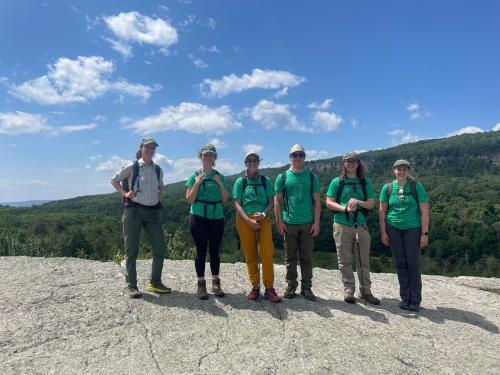 July was another busy month, filled with more training and special events on days when we weren’t out stewarding or performing maintenance on the trails. At the beginning of July, all six Stewards became certified Leave No Trace Trainers. In mid-July, we participated in a special Leave No Trace Hot Spot event at Minnewaska State Park Preserve. This was exciting as it allowed us to meet with park staff, land managers, and other stakeholders who have a hand in improving the conditions of this park. Social trails, trampling of sensitive vegetation, and improper disposal of waste are common problems at Minnewaska— especially on the trail going out to Gertrude’s Nose. We collaborated on the most effective ways to tackle these challenges, and it was reassuring to see the research from the Leave No Trace team that showed how effective on-the-ground stewardship is.

You can read more about the Hudson Valley and Catskill Trail Steward crews, including stories about the other trailheads and summits where they are stationed, here. 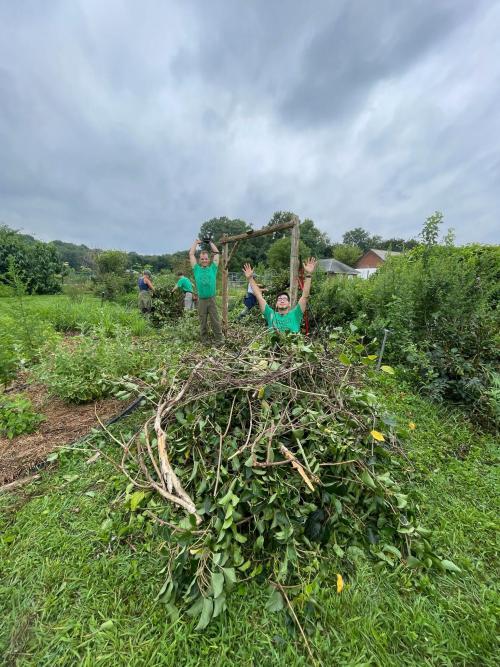 The ISF crew kicked off July removing Scotch broom at Harriman State Park and the Ralph E. Ogden Foundation and had some help from volunteers. The crew also worked on Chinese silvergrass, swallowworts, and small carpetgrass at High Tor State Park and Shrub Oak Memorial Park. Next, the crew continued managing sticky sage at Dover, N.Y. The crew proudly finished managing all the sticky sage found along the Appalachian Trail in this visit! It is essential to manage sticky sage along the trail to prevent the spread of this relatively new invasive to other regions in the Northeast. Overall, the crew is proud to say that they treated a total of 6,182 sticky sage along the A.T.! The crew will be returning to Dover one last time for the season in August to continue working on sticky sage management on private properties.

You can read more about the Invasives Strike Force’s efforts this season here.

For the Aquatic Invasives Strike Force (AISF) crew, the month of July has been filled to the brim with water chestnut removals! Over the course of July, the AISF crew has removed just over 105,000 plants from 11 sites! In total, these plants weighed over 14,000 pounds. The AIS Program has also been heavily involved with multiple stakeholders from Lake Sebago in Harriman State Park to devise a strategic plan for managing aquatic invasive species through early detection and prevention. Earlier this month, AISF Crew Leader Maya Thompson and AIS Program Coordinator Lindsay Yoder led an aquatic survey training session for the three group camps on Lake Sebago: Adirondack Mountain Club, Appalachian Mountain Club, and the American Canoe Association (ACA). The Lake Sebago ACA camp also spearheaded a pilot Watercraft Inspection Steward Program for a single Saturday at the public launch, where nearly 100 boats were inspected, providing significant support for the creation of a full-season program.

You can read more about the AISF crew’s efforts this season here.