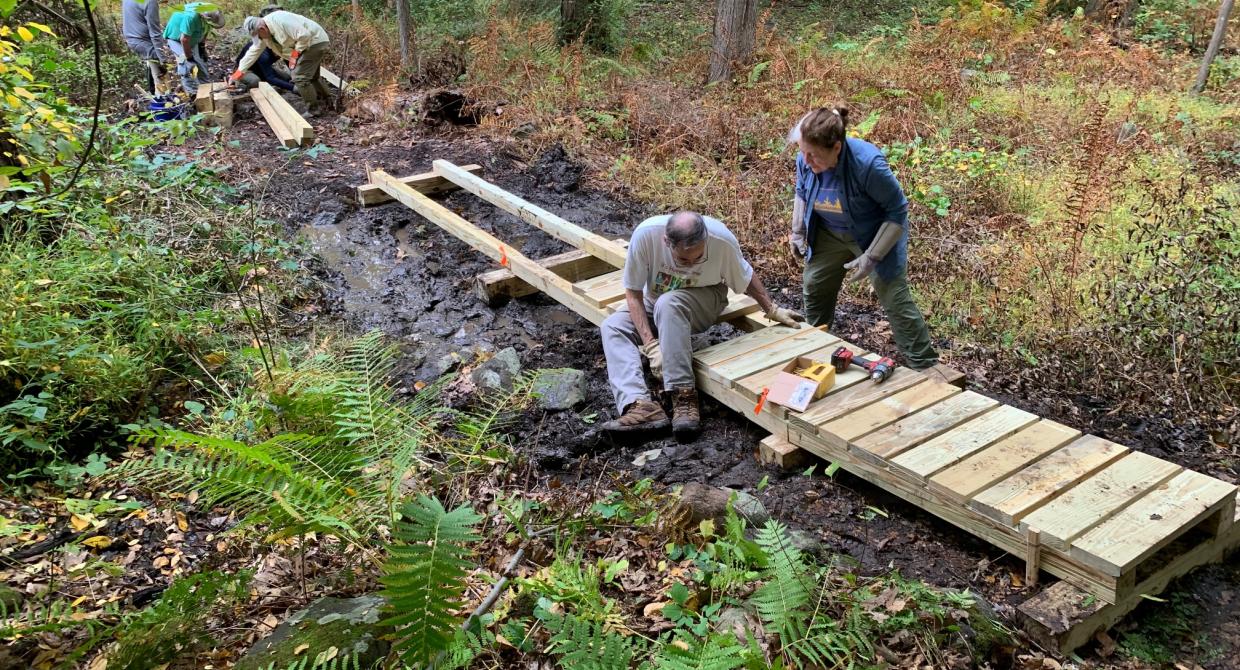 The volunteers of the Trail Tramps made significant improvements along the Briarcliff Peekskill Trail in New York’s Westchester County thanks to the support of a donor.

In 2020, before the COVID-19 pandemic began, hiker Mark Perreault walked the Briarcliff Peekskill Trail in New York’s Westchester County and became concerned about the trail’s need for extensive revitalization. He then contacted the Trail Conference and the county. Connie Stern and Michael Pashley, volunteer crew leaders of the Trail Tramps, sent him their proposal for upgrading the BPT to Trail Conference standards. Mark generously offered to finance its many major improvements.

The BPT, a 12-mile linear route from Ryder Road in Ossining to Blue Mountain Reservation in Peekskill, was once earmarked as a major highway, then spared by Westchester County when it was designated a hiking path. The major problem for the midway section at Mt. Airy Road East in Cortlandt is that it led hikers onto a busy road. It had to be brought back into the woods. Over time, flooding and undergrowth had destroyed the original tread. Moving uphill was the best solution for a new trail. The donor’s support would enable these major changes, including a new boardwalk over wet muddy terrain.

After gaining approval and assistance from Westchester County Parks Division, Michael and Connie engineered a new track and planned a work schedule for the Trail Tramps, who regularly meet on Wednesday mornings. With the new funds in hand, measurements were taken, a path was laid out, lumber was ordered and delivered, and the Trail Tramps hauled it a quarter mile to the work area.

“We knew we had to elevate the boardwalk to clear the existing wet conditions,” Michael says. After removing fallen trees, the crew, often deep in mud, built 140 feet of boardwalk spanning tree roots, rocks, and streaming water. “When each 8-foot section was assembled, builders cheered as more wet, muddy ground was covered,” Connie says. From the project’s start in September 2021 to completion on November 3, the Trail Tramps logged over 320 hours on this project.

Were it not for Mark’s generous support, hikers would still be on the road dodging traffic. Now there is a serene woodland boardwalk that retains the forested landscape and provides safe dry passage.

The Trail Tramps have taken great care in restoring the Briarcliff Peekskill Trail. To date, they have blazed, removed fallen tree blockages, built and repaired over 300 feet of boardwalk and puncheon, rerouted tread from impassable wet areas, and cleared debris and invasives up and down the trail. Future plans for the BPT include building additional boardwalk through boggy stretches, further relocations to avoid road sections, the updating of kiosks and website information, and continued trail maintenance.

Permalink Submitted by Visitor (not verified) on Wed, 02/16/2022 - 09:30
A thousand thanks to the Trail Tramps who recently improved the Briarcliff Peekskill Trailway. Know that your hard work is appreciated by those of us who happened upon the it. My husband I tried to enter it south of the Croton Dam 20 years ago and gave up. Now we can brag that we’ve explored the entire length!
Trail comments ratings:
5
Average: 5 (1 vote)