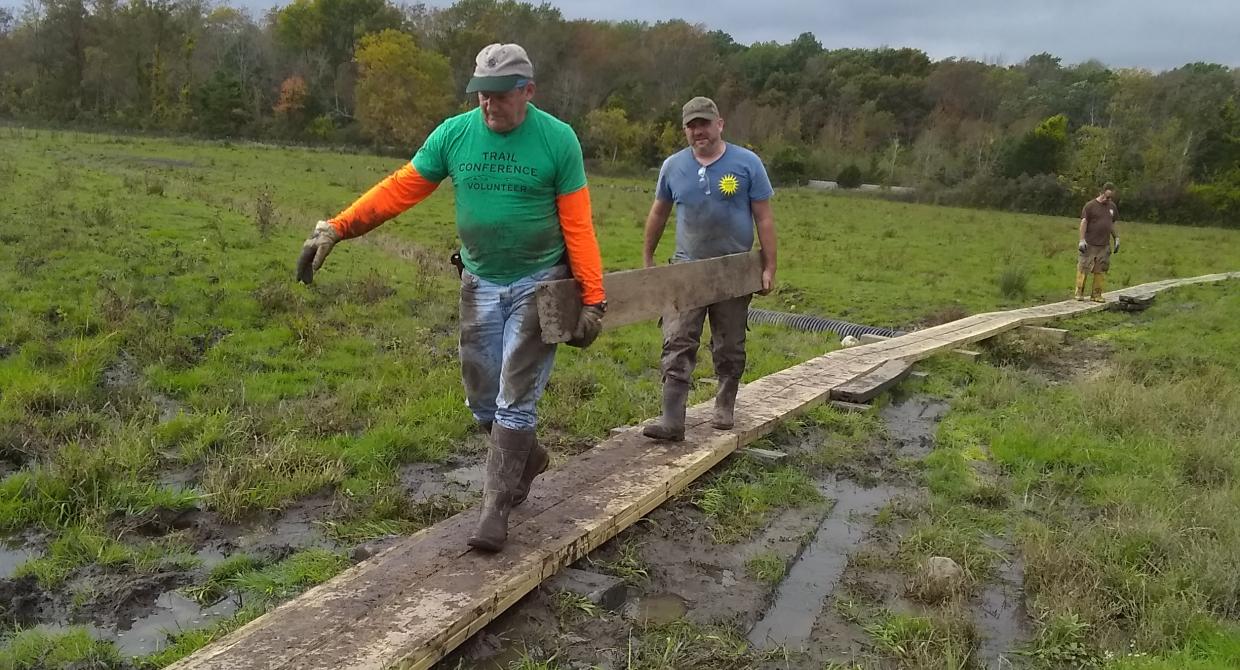 The West Jersey Trail Crew carried out the work on Pochuck Boardwalk on six consecutive Saturdays this fall. The lumber was delivered into “field 1”; special thanks to Neversink Lumber for driving far into the field with the delivery! With the assistance of Wawayanda State Park’s Kubota service vehicle, the crew moved the materials into “field 2” and to large piles at either end of the boardwalk in “field 1”—as far as the Kubota could reach in the soggy field near the boardwalk.

Although none of the work dates were rained out, there was substantial rainfall every week during the project, and the work area was wetter and muddier every week. High rubber boots were essential, and it was common to sink 6 or more inches into the mud while working. Cattle are grazed in “field 1,” which further contributed to the muddy conditions.

This section of the A.T. is very popular, and the crew saw many hikers every workday. As the old planking was removed, the crew laid each plank in the mud next to the puncheon, providing a detour route, however precarious, for hikers to pass while the crew worked.

Once the replacement work was completed, the old planking was taken up from the mud and carried to locations at the end of the boardwalk reachable by the Kubota. There it was cut into smaller pieces and removed with the assistance of Wawayanda State Park staff.

We thank the Appalachian Trail Conservancy for awarding the grant for this necessary project, and thank L.L.Bean for their generous Grants to A.T. Clubs program. We are also grateful for the support from Wawayanda State Park staff, and from the owner of the cattle that graze in “field 1” for graciously moving the cattle for most of our work days. A special thank you to the members of the West Jersey Crew, who returned week after week, got muddy, and worked hard until the job was done.