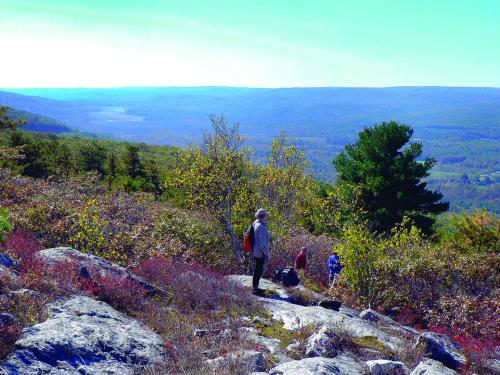 The Long Path is lovingly maintained by 250 Trail Conference volunteers and member groups. The Long Path Guide (5th edition; 2nd printing; 2005) is out of print, but we have made an online version available below.

The Long Path begins at the 175th Street Subway Station in New York City. The aqua blazes begin in Fort Lee, on the New Jersey side of the George Washington Bridge. For the first fourteen miles to the New York State line, it crosses the George Washington Bridge, then follows along the Palisades through lands of the Palisades Interstate Park. There are many spectacular views of the Hudson River and New York City along the way.

After crossing into Rockland County, New York, the LP turns away from the Hudson River between Piermont and Upper Nyack, but then continues to follow the Palisades Escarpment to its end in Mt. Ivy. Much of the route is through State Parks but the trail also serves as a link to smaller county and town parks. There is some road walking through the towns of Piermont and Upper Nyack. There are extensive views of the lower Hudson River valley along the way, with the most dramatic views on Hook Mountain and High Tor.

Leaving the Palisades, the Long Path Trail enters Harriman State Park, passing through the park in a northwesterly direction and entering Orange County. The park is criss-crossed with an abundance of trails, and there are many opportunities for circular hikes. The trail crosses the AT,which can be followed to reach the Shawangunk Ridge Trail (SRT) in High Point State Park in northwest New Jersey. The SRT in turn connects with the LP in the Town of Greenville, NY. This route provides a backpacking alternative to the Orange County route, which involves a long roadwalk.

North of Harriman, the trail continues through Orange County and Schunemunk Mountain State Park. Schunemunk is the dramatic long ridge that is the westernmost mountain near the Hudson in this vicinity. It is made up of conglomerate rock and has spectacular views both east to the Hudson River and north to the Shawangunks and the Catskills. From Schunemunk the trail continues on the Orange County Heritage Trail, a rail-trail, before it embarks on a 13-mile roadwalk to the Shawangunk Ridge which it reaches in the Town of Greenville.

The Long Path joins the Shawangunk Ridge Trail in Greenville. During the next 30 miles the trail follows woods roads, old railroad beds and ridges with vistas ranging from High Point in New Jersey all the way to the Catskills Mountains. The Long Path trail leaves Orange County, passes through Sullivan County, then enters Ulster County, on its way to the northern Shawangunks, which are characterized by beautiful white cliffs and spectacular waterfalls, and are one of the gems of the eastern United States. The LP passes through Minnewaska State Park, passing Verkeerder Kill Falls and many view points on its way north.

Leaving the Shawangunks, the Long Path crosses the Rondout Valley before it enters the Catskill Park. The LP continues through the Catskill Park for 100 miles and climbs nine of the major peaks including Slide Mountain, the highest in the Catskills. Several lean-tos are located along the trail. There are a few roadwalking sections, but these are generally through undeveloped areas.

Leaving the Catskill Park, the trail passes over a series of 2900 foot peaks, and through State Reforestation Areas.

Beyond the cliffs, the trail leaves the Schoharie Valley as it turns east, crossing State Forests to reach Partridge Run Wildlife Management Area in Albany County. In Partridge Run, the Long Path trail follows mostly cross-country ski trails, past lakes and streams with occasional views back to the Catskills.

East of Partridge Run, the Long Path crosses private property then ascends Cole Hill State Forest as it continues east across farmland to the Helderberg Escarpment. The soft limestone of the Helderbergs has caused many caves, sinkholes and underground streams to be formed. The LP turns north and follows the escarpment to John Boyd Thacher State Park where there are many dramatic views of the Hudson Valley and the Taconics. Here, the LP uses the historic Indian Ladder Trail which once led to the trading post at Albany.

The current official End-to-End northern terminus of the LP is at the north end of Thacher State Park. The route described from there (84 miles) is mostly on country roads, across the Mohawk River to the Northville-Lake Placid trail in the Adirondacks. Most of the roads are remote with many lovely views. Work is continuing to move the trail from the roads.